The latest craze lighting up social media feeds is a spate of AI-generated portraits: enhanced selfies that are made with the photo editing app Lensa. Using the “Magic Avatars” feature, the app creates original images of users’ likenesses in a range of artistic styles such as Pop, Art, Fantasy, and Anime. An annual subscription to the app costs $29.99 or $7.99 a month. Subscribers can upload up to 20 selfies which will be converted into hundreds of stylized portraits that look like they were created by a digital artist.

The Lensa app was dropped in 2018 by Prisma Labs. Like many photo editing apps, it offers a host of tools that allow users to remove objects from photos (meanwhile the Google Pixel can do this now), touch up blemishes in selfies and change backgrounds. Interest in Lensa surged when it launched “Magic Avatars,” its AI selfie generator feature, in late November 2022. The app was downloaded 1.6 million times that month, up 631% from the 219k downloads in October 2022. This spike boosted the app to the top of Apple’s App Store charts, beating out TikTok and Instagram. Impressive to say the least!

In the technological world, disruptions are not only part of the process but are to be expected. The industry is innately fast-paced, therefore many products are at risk for technological obsolescence (when a technical product or service is no longer needed or wanted, even though it could still be in working order). “This happens all the time when new technology comes onto the market; there is always an overall sense of fear that is unfounded,” explains Ryan Hurlock, an IT expert and Founder of HurlockIT.

At the dawn of the Millennium, society witnessed multiple iterations of disruptions starting with the music industry. Recording artists struggled with the notion of not selling CDs or records anymore with the advent of downloads and streaming. Independent artists were scared and convinced it would destroy their careers, but then platforms like MySpace, YouTube, Bandcamp, Spotify, and TikTok made it possible for them to reach their audience.

So how is AI-generated artwork made? In the simplest terms, it works based on prompts that access a database. It then follows a process that works on the same formula and style. Artists write algorithms not to follow a set of rules, but to learn a specific aesthetic by analyzing thousands of images. The algorithm then tries to generate new images in adherence to the aesthetics it has learned.

Unlike Instagram which has filters and effects, “Lensa’s AI avatars are generated from scratch but with your face in mind,” states Prisma Labs. While Lensa AI does offer a strong appeal with its lightning-fast ability to “Warholize” selfies through a combination of air-brushed glamour and high-contrast sculpting, it raises a host of ethical questions about automated art, copyright, authenticity, and privacy.

With this in mind, AI-generated art has induced the next “great debate” in technology and is directly affecting digital artists and copyright holders because they are not being credited or reimbursed for their artwork. For example, none of the artwork that is being used to train the AI model that Prisma Labs is monetizing is being credited accordingly. While fragments of artists’ signatures are visible in some of the digital avatars, they are not clear nor assigned to a specific artist.

Digital artists are also worried about how AI generators might devalue their skills as artists. In order to create AI-generated art, you do not need to have any art skills, hence the pushback. A lot of AI art looks like “photo bashing,” meaning it steals the stylistic attributes without giving any credit to the artist(s). This introduces a host of copyright issues as work is being stolen by a program that is not public domain, fed images and outputting “stolen” images in the form of AI art.
As such, many digital artists do not consider AI-generated art to be fine art, but rather “AI imagery.” Art by definition is typically assigned to human creative skill, not computers. This poses a huge threat to digital art careers as AI-generated art is set up to take away job opportunities from digital artists, in addition to making money off of these artists without their permission.

The tricky part about an app is that even though it was designed by humans, it does not “think” like a human. More specifically, it cannot tell right from wrong therefore can easily forge works and/or create inappropriate material from almost any image it is fed. For example, technology researcher Olivia Snow used her own childhood photos to demonstrate that Lensa AI does not have any preventative measures in place for eroticizing images of children.

Some users of Lensa AI expressed privacy concerns about how the company uses their photos and personal data. While they claim to delete the uploaded selfies after they have been converted into avatars, they still use them to train neural networks and reserve the right to use personal data to improve the app.

The protagonist’s point of view on this debate is perhaps a bit more evolved in its thinking and reasoning. For those in this camp, AI-generated art is welcome because it is considered a massive stride in the art world. The only difference in the way AI art and humans work is the access: as humans, we only have so much mental bandwidth; conversely, AI art has limitless resources because it’s a computer and this results in a faster process and a “more” original product because it has access to a broader database.

AI artist Claire Silver observes, “With the rise of AI, for the first time, the barrier of skill is swept away: Taste is a new skill. What comes next will be the cream of humanity’s entire creative lineage. It is imperative that we, as a species, take this moment to recognize the transcendent longing inherent in being human, and that we commit to bringing it with us into our future.”

If we view AI art generators like Lensa as a middleman and not a competitor, that is where their true potential can be mined. Creativity for humans could be on the brink of a massive upgrade if used correctly. From this perspective, AI art generators are not replicating artwork or taking specific pieces of people’s art. Rather it is making advanced associations between keywords and artistic styles using publicly available datasets provided by Google. It is worth noting that Pantone enlisted the help of AI to select the 2023 Color of the Year, “Viva Magenta.”

Digital artist Robert Wayne offers, “Conceptually an AI generator can do exactly what a well-rounded commission artist can do, and in most cases more efficiently and faster…this debate mimics the ones we had when photography became accessible, or during the transition of film photography to digital photography, and when Photoshop came out. The one thing all those things have in common is people with skills being scared their skills will become obsolete.”

Not unlike the collapse and rebirth of the music industry, AI symbolizes the next evolution of creativity. Where some artists will use the AI generator for artistic images as a novelty; other artists will not use it at all because they view it as detrimental to their work and process. There will also be a group of artists who catch onto the fact that AI is merely another tool that enhances their creativity and gives them ideas that they have never even thought about before. It will allow them to draw from AI-generated images–which is more original than just regurgitating the same tropes. Eventually, rules and regulations will change the rules on all of this, and it will affect the jobs of “concept artists” who are involved in movies, gaming, comic books, writing, video, and photography industries…which begs the question, which side of the digital fence are you on? 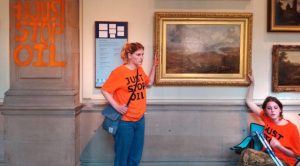 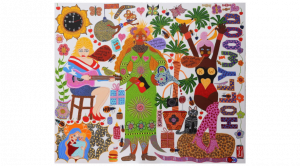 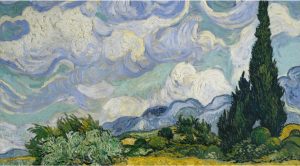